On the treadmill last week, at an hour when only werewolves and swim parents are awake, I listened to Pete Scazzero’s Emotionally Healthy Leader podcast and heard him say, discussing the temptations of Jesus, the phrase “up and to the right.” And I realized, listening to the discussion: there’s Hinduism, Islam, Christianity…  but do you want to know what the universal religion is?  It’s up and to the right — up and to the right.  Here’s what he meant, I think. Our world has a standard of greatness and significance that can be measured on a graph — a graph where the x-axis is time and the y-axis is performance or achievement. Over time is my profit increasing? Am I making more money? Are my social media followers increasing? Are my grades improving? Is my game day performance improving? Are my titles and positions at work going up and to the right? Is our church attendance number going up and to the right?

Now to be clear — there is nothing wrong with making a profit, improving your shooting percentage, seeing more people to come to church, or any of the rest. But Scazzero was making the point that around the world people base their worth, people judge who they are and who others are by this “up and to the right” standard. People measure themselves and their lives based on whether things are going up and to the right.”

Further, this up and to the right principle requires constant comparison and calibration.

Where am I? Who is below me? Who is above me? What can I do to get myself up there or them down there? Scazzero’s podcast led me to consider that our world’s universal religion is this: trying to elevate your rank or status by performing better. In the face of that common human approach, along comes Jesus, who changes our constant question of “How do I compare in rank to this person?” to “How can I serve this person?” Jesus and Christianity teach a reversal of all human ideas of greatness and rank.

In Mark 9, Jesus is at the top of his game. He has come down the mountain from where he gave a few of his disciples a preview of his glory; he has healed a young boy, and now he is on the move. He is passing through Galilee, but, in the first hint that this is not a triumphal march, he doesn’t want to draw any crowds. Mark 9:31 tells why, because he is teaching the disciples something unexpected and (to them) unfathomable: “The Son of Man is going to be delivered into the hands of men, and they will kill him. And when he is killed, after three days he will rise,” the same message he had begun in chapter 8.

Notice the parallel, the pattern developing in chapters 8 and 9. This is the second time Jesus has told his disciples the plan, the second time he has predicted his crucifixion, and he will do so a third time. What is the pattern? Jesus says he will suffer, be killed, and rise again. Then what happens next in chapter 8? Peter rebukes him. Now in Mark 9:31 Jesus teaches the lesson again, and what happens next? The disciples get caught arguing about who was the greatest.

Then in Mark 10, maybe the most tragically comic of the three episodes, Jesus says he will be mocked, flogged, spit upon, killed, and then rise in three days. What happens next? Does the penny finally drop? Do they finally get it?  No. James and John ask, “Grant us to sit, one at your right hand and one at your left, in your glory.” Strike three. Jesus is talking flogging, mocking, spitting, yet James and John are trying to make sure their seat selections in glory are up and to the right, focused on being seen as those who sit in the important positions. In other words, James and John are trying to score VIP seats.

At first, we can have a good judgmental laugh at how clueless the disciples are… until the laughter dies down and we have to ask ourselves, are we really that different?

If we return to Mark 9, Jesus’ second teaching about his coming passion, we find him in the house with the disciples, asking them, “What were you discussing on the way?” (v.33).  Awkward silence. Why? Because, v. 34, “They had argued with one another about who was the greatest.”

Here was the disciples’ problem: they had internalized their culture’s definition of greatness and significance. It had taken life inside of them. Rabbinic writings of the time were full of teaching on significance and standing, writings about who would be closest to the throne of God in eternity. Would it be the most just and righteous? Those with the greatest knowledge of the Torah? Teachers? Martyrs? Even more, ancient writings show how the seating charts at earthly meals would reflect this eternal ranking. We can start to see why these disciples were having these kinds of conversations. The religious culture of their day was fundamentally about up and to the right — performing better over time in comparison to others — so that all would see how great you are by where you get to sit. The disciples had let this understanding of greatness grow inside of them.

Have we not done the same? Where can we look to see if our culture’s understanding of greatness and significance is growing inside of us? Maybe we should start with social media. Are we not ambitious to raise our follower count? With the view social media gives us into others’ lives, are we not “influenced” by the great and beautiful? Do we not daydream about what it would be like to be them?

Now consider work. Have we not adopted an understanding of significance and status that leads us to treat others poorly, to ignore, to neglect others who are beneath us on the org chart? Do we not often pretend to be something we are not around someone above us on the org chart?

In parenting, is our priority our children’s performance (in music or school or sports)? Is our foundation rocked and destroyed when they fail — or should we say, when they fail publicly? Is our parenting primarily focused on up and to the right?

On our screens, in our daily lives, among our families, in our country’s history, and yes even in the church, we adopt the world’s definitions of greatness. How many abuse scandals have we seen involving celebrity pastors because these “prominent” people, notable church leaders, had their behavior excused and overlooked if financial giving that was going up and to the right, if attendance numbers were going up and to the right, if preaching skills and charisma charted up and to the right. These gave reason to turn a blind eye, ignore warning signs, bury and blame victims, and we should never ever think ourselves above it or immune to it.

Back to the house where Jesus and the disciples are. The awkward silence has told Jesus all that he needs to know, and Mark reports that he takes a seat. We might not feel it when we read it today, but teaching from a seated position communicated authority. In the synagogue, the rabbis sat to teach. Jesus sits and says, v.35, “If anyone would be first, he must be last of all and servant of all.”

What is Jesus’ point? Given both high infant mortality rates and the great demand for human labor, children were basically afterthoughts in Roman society, meaning that the Roman World was not all that sentimental about children and youth. Yet Jesus declares that greatness is serving everyone, even those who are afterthoughts.

Even today — though thankfully we value children more — our culture does not define greatness by serving and sacrificing for children. Think of the awards we hand out, Grammys and Oscars and Espys, Macarthur Grants and Pulitzers, but sadly childcare and teaching, serving and investing in the next generation, those are not placed up and to the right in our world.

But, it is in God’s kingdom. Jesus says, commands, that we serve people who cannot pay us back, people unlikely to give us praise or cause us to gain praise. He commands us to give our lives away to others instead of living for the praise of others, to spend our lives trying to elevate the position of others instead of trying to elevate our own position. This is his pathway to greatness and significance.

Have this mind among yourselves, which is yours in Christ Jesus, who, though he was in the form of God, did not count equality with God a thing to be grasped, but emptied himself, by taking the form of a servant, being born in the likeness of men. And being found in human form, he humbled himself by becoming obedient to the point of death, even death on a cross. Therefore God has highly exalted him and bestowed on him the name that is above every name, so that at the name of Jesus every knee should bow, in heaven and on earth and under the earth, and every tongue confess that Jesus Christ is Lord, to the glory of God the Father.” (Philippians 2:1–11, ESV)

Jesus loves us enough to go down that path, the path of humiliation. He only calls us to something that he, himself has already done for us, more than we ever could. The more we realize what Jesus gave up, what he endured to serve and save us, the more we ourselves are compelled to serve others.

God save us from a Christianity that only cares about up and to the right – getting bigger and bigger so that we can be regarded as great. My prayer is that we would return to being the church that serves, serves those who have no social capital, the students, the homeless, the unnoticed, the least of these. Yes, also those in the C-suite, but also those in the nursing home, not only those who give and influence, but also those who can give nothing and influence no one. I pray we would no longer be Christians seduced by counterfeit notions of greatness and significance. I pray we would no longer be consumed by how we rank in comparison to others, but instead that we would be those who have seen the great love of our savior, a king who became a servant for us, and lay down our lives to serve and love those around us. 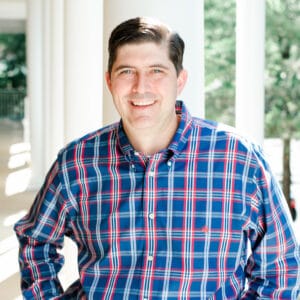 Rob Yancey is the lead pastor of Capital Presbyterian Fairfax in Fairfax, Virginia. He has served previous churches in family ministries, missions, and outreach. He and his wife, Liz, also spent 8 years serving in South Africa where he was an Area Director for Campus Outreach Johannesburg. Originally from North Carolina, Rob earned his undergraduate degree at the University of North Carolina at Greensboro and completed his Masters of Divinity with Reformed Theological Seminary in 2014. Outside of church, Rob enjoys concerts at the 9:30 Club, fly fishing, cheering on his North Carolina Tar Heels, and relaxing with a game night with Liz and their two boys, Ben and Will.

You’re Taking My Grandkids Where?: Mark 6 and the Cost of Discipleship