You’ve probably seen the speculation – will social distancing lead to a baby boom or a divorce boom ten months from now?  For those who live with family or roommates, the lockdown has a paradoxical effect, isolating us from so many of our friends but isolating us with our immediate household or roommates.  The extroverts are going crazy because they can’t get out to see people, and the introverts are going crazy because they’re stuck inside with people!  No doubt, this has allowed many of us to reconnect with loved ones… and no doubt it has also given us the opportunity to fall out with them too. Add in the continual, low-grade stress of this time, and we have a recipe for many people leaving lockdown and heading straight for the divorce lawyer, whether literally or metaphorically.

In these unusual circumstances, the smallest book of the New Testament can have an outsized impact. Philemon is a tiny book (only 335 words in the original Greek), but it has a huge amount to teach us about navigating conflict. So much, in fact, that this article will only focus on the very first verse.[i]

When conflict arises in your life, how do you tend to handle it?  Have you ever wondered what it’s like to argue with you?  That’s one of those unnerving questions that it does us good to think about.  I once heard it said that, in conflict, some people are like rhinos.[ii]  When it comes to an argument, they put their head down and charge with full-on effort; they throw out everything they have to say, don’t hold a thought back, and just attack the conflict with gusto.  Others are more like hedgehogs.  When conflict erupts, it makes them incredibly uncomfortable.  They dislike conflict, so they curl up into a ball and become a little prickly.  If you’re neither a rhino nor a hedgehog, maybe you’re more of a snake?  In conflict, you are super calm… and super manipulative.  You don’t yell; you don’t scream; you don’t ball up.  You smoothly navigate with a serpent’s tongue to get your way.

In my home life, I tend to be a rhino. My wife, who is a hedgehog with the rest of the world, tends to be a rhino with me.  So, when conflict erupts in our marriage, we tend to attack it head-on, for better or worse.  What about you – are you like one of these three: the rhino, the hedgehog, or the snake?

Self-awareness is a good thing, and that’s how Paul starts his letter to Philemon. Before helping Philemon navigate conflict of his own, Paul takes a good look at himself. He’s modeling the teaching of Jesus: before you talk to others about the specks in their eyes, make sure you’ve dealt with the plank in your own! His honest self-assessment leads him to introduce himself, not as some kind of animal, but as, “Paul, a prisoner for Christ Jesus.” Two things stand out about this introduction.

First, it’s striking that Paul introduces himself as a prisoner; this is very different to his typical introduction. Normally, he calls himself, “Paul, an apostle.” Apostle is Paul’s title, and it represents his position and authority in the church. When an apostle speaks, people listen – or at least they’re supposed to! Paul wrote thirteen letters, and in ten of them, he refers to himself this way. But not here. Here he drops apostle in favor of prisoner.

Why would he do that?  On the one hand, simply because it’s true.  Paul is writing from a prison cell.  Scott McKnight details that this means Paul was likely chained and underground, as was typical in Roman prisons.[iii]  It would certainly have been hard to ignore his current reality. But most commentators agree there’s more to it than that; that Paul introduces himself this way as a self-conscious act of humility.[iv]  Paul is saying – in effect – “I’m not going to call myself an apostle; I’m nothing more than a prisoner.  I’m not going to flash my credentials and demand you pay attention. Instead, I’m going to remember my place.” Paul identifies himself with the weak and lowly, not boasting in his own strength but humbling himself before a watching world.

The second thing that stands out about Paul’s introduction is that he describes himself as a prisoner for Christ Jesus. He is aware – painfully aware – of his circumstances, but he brings God into the equation.  He doesn’t deny the challenge he faces – and neither should we while on lockdown today! – but he does what the news outlets never do.  He brings God into the equation.  He recognizes that God rules and overrules everything, that God is our strength and protection, and that he is precisely where God wants him to be.  For Paul, being a prisoner for Christ Jesus transforms his situation.  It brings meaning and intelligibility to his circumstances. He is not just lowly; he is also loved.  Yes, he is weak, outcast, and lost; but he is also treasured, saved, and bought.

Paul is modeling for us the basic building blocks of a gospel identity: We are lowly and loved; we are of little account, and yet of great worth to God. Only after grounding himself in this identity does Paul move to help Philemon navigate conflict. Why is this so important to do? Consider how our gospel identity changes our approach to conflict.

First, our gospel identity creates humility.  One major obstacle – maybe the primary obstacle – to reconciliation is admitting we’re wrong.[v]  We become so amped up about what another person has said and done that we become blind to our own contribution. Once conflict erupts, the red mist descends, and it’s like we have blinders on.  We become all-accusing and all-defensive all at the same time. But the gospel bursts our self-righteous bubble. When we concentrate on the gospel, it suddenly becomes easy for us to imagine that we may be in the wrong.  Of course, we think we’re right – otherwise, the battle wouldn’t have begun!  Yet, we realize, “I do think I’m right, but I also know that if I were wrong, I’d still think I was right.  And I’ve been wrong before – A LOT!  I think I’ll bear that in mind as I navigate this situation.”  As a result, we temper our words and leave space to genuinely listen. If you do marital counseling, one of the things you continually see is that folks come in wanting you to “fix” their spouse.  That never works.  Marriages start to heal – not always, of course, but often – when people are each willing to quit trying to fix their spouse and instead focus on what it means to change themselves.  Our gospel identity gives us this kind of humility; it makes us humbler than we would ever be without it, and humility disarms and diffuses conflict.

Second, our gospel identity gives us affection for people who are being difficult.  We all have people in our lives who drive us crazy.  Some people take life too seriously, others not seriously enough.  Some are too sensitive, others too harsh.  Some are too passive, others too opinionated.  Some are too boring, others too quirky.  Some are too this, others too that.  What the gospel does is cause us to quit looking at “them” and start considering ourselves, to realize that we, too, can be crazy and difficult.  It may or may not be apocryphal, but the story is told of G.K. Chesterton, the English writer who wrote Orthodoxy, a book well worth the time, at the turn of the twentieth century.  As the story goes, a major British newspaper, The Times, asked several famous authors to answer the question, “What’s wrong with the world?”  Chesterton’s reply was, “Dear Sir, I am.  Yours, G.K. Chesterton.” When we see the gospel clearly, we realize that there is more than a little crazy and difficult in each of us.  In fact, we are more than difficult; we are sinful – and yet we have been given grace.  That leads us to want to extend that same grace we have received to others when they are being difficult.  Our gospel identity makes us kinder and gentler than we would ever be without it, and that gentleness is also disarming and diffusing in conflict.

Third, our gospel identity gives us the courage to act.  Paul is no shrinking violet.  Some things need to be said, and he is not afraid to say them.  In the face of conflict and awkwardness, Paul does not just sit still and wait!  He has strong words: Philemon’s love for Jesus must overflow into love for people whom God has created and redeemed.  Paul does not shrink back from delivering the message Philemon needs to hear. The gospel can give us this kind of strength as well.  When our identity is secure in Jesus, we no longer need to be validated by anyone else.  That leaves us prepared to love others well, even when doing so is hard.  When we are no longer afraid of what others think, we are free to say what needs to be said.  Our gospel identity makes us stronger than we would ever be without it, giving us the courage to engage in healthy conflict.

Conflict is inevitable.  Put any two human beings near each other – ever – and you’ll eventually have conflict.  This reality is only amplified by challenging seasons like the one we’re currently in. Even as you read this article, there might be tension in the air with your roommate or spouse.  (It’s a sad reality that the relationships that have the most potential for good also have the highest potential for harm.) The gospel life doesn’t free us from conflict, but it does equip us to navigate it. And it all starts by remembering who we are in Christ – lowly and loved. This gospel identity makes us humble, affectionate, and strong; it makes us less like rhinos, hedgehogs, and snakes, and more like Jesus – the lion and the lamb.

[i] For an excellent summary and explanation of Philemon that was formative to this article, see Paul Jeon, Unreconciled, (Eugene, OR: Wipf & Stock, 2018).

[ii] I first heard about the hedgehog and the rhino at a marriage conference in my twenties. I believe they were developed by Nicky Lee and Sila Lee in The Marriage Book.  I added the snake as I reflected upon how people in D.C. navigate conflict.  (Lee, Nicky and Sila Lee. The Marriage Book (Nashville: Thomas Nelson, 2009).

[vi] The story could well be apocryphal. See here for one retelling. 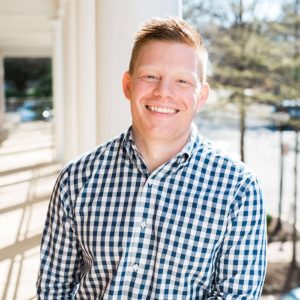 James is the Senior Pastor of McLean Presbyterian Church, located just outside of Washington, D.C. He grew up in Edinburgh, Scotland, where he graduated from the University of Edinburgh, before moving to the U.S. to study at Reformed Theological Seminary (RTS), Jackson. He is now a Guest Professor of Practical Theology at RTS Washington, D.C.

When the Psalms Promise Too Much

Lessons on Prayer from Daniel’s Life in Exile