I loved reading the stories of Israel as a child: the heroism of David, the wisdom and fall of his son, the never-ending cycle of good and bad kings, and God’s prophets who reminded his people of his faithfulness through it all.  I would always get excited when we got closer to reading about Israel’s exile because that meant that we were getting closer to the prophet Daniel – my namesake.

As an American Christian born in the 90’s my life has not held many things I could compare to Israel’s exile. It is one thing to understand that God’s people were taken from their homes; that they were no longer able to gather and worship together in the temple; and that all their hopes and expectations for their lives as individuals and as a people were shattered.  It is another thing to personally know something of hopes no longer realized, lives shattered by the disruption of an outside army, and the sorrow of being unable to gather in person with the people of God.

It is certainly a sign of my privilege that in the first 25 years of my life the best comparison I had to an exile was choosing to go to college and live my early adult years over 2000 miles (but only 5 hours by plane) from home. Many, many people in our world today have had much more visceral experiences of exile – whether person, familial, or political.

But for many younger Americans, including myself, these last three weeks in quarantine have been the most disruptive thing that has happened to us.  And even though it would be a tad dramatic to call these past three weeks an exile, today as I watched my church’s livestream alone in my room, I thought about the story of Israel’s exile and specifically the story of Daniel.

Now growing up as a boy named Daniel in the church there were lots of stories I loved to hear:

Today it was that last story that I thought about, but it wasn’t the parts that I would think about as a boy – i.e. the lions. No, it was the beginning of the story, the event that set all the rest into motion – that Daniel prays in his room three times a day.

“When Daniel knew that the document had been signed, he went to his house where he had windows in his upper chamber open toward Jerusalem. He got down on his knees three times a day and prayed and gave thanks before his God, as he had done previously.” (Daniel 6:10)

The Habit of Daniel’s Prayer

There are a couple things that I love about this. First, something dramatic has just happened; everything is supposed to look different now; and Daniel knows all this but continues to do what he had done before. Now there are all sorts of wrong applications we could make in this current season, but the correct one is this – many things have changed about our schedules and our routines because of the coronavirus – for the sake of safety we cannot currently meet in person with other Christians to worship, but one thing we can do is pause three times a day to pray.

Right now, my instinct is to forget all my routines: “Everything around me has changed so my routine has to change, I have to stay busy by working, watching movies, playing games, or generally killing time until this is all over.” But in a crisis Daniel continues to seek the Lord. His routine stays the same. And as I contemplate the prospect of another 2 months of self-isolation, I want my routine to look more like the prophet Daniel’s.

The Orientation of Daniel’s Prayer

The second thing I love is that his routine stays the same, but his routine is not ideal. Look again at verse 10 and how Daniel orients himself when he goes to his room to pray – he points himself towards Jerusalem. Daniel was in exile, his life looked pretty good compared to most Israelites in exile – but his life was still not as it should be. Ideally Daniel would be with other Israelites in Jerusalem, in the temple, worshipping God, but that temple was destroyed, and the people of God were scattered across the known world unable to gather and worship.

Ideally today, and much more as Easter comes, Christians around the world would meet together on Sundays to worship and fellowship together, but we are unable to because of the threat of disease, so we like Daniel have to settle for the intermediate good of going into our own rooms to worship. And we, like Daniel, should orient our hearts and set our face towards what should be – yes, worshipping together after this pandemic has passed – but also praying with our faces turned towards the New Jerusalem that is yet to come, where we will worship together one day, no longer a geography, but a world restored to what it ought to be.

The last thing I love about this passage is what Daniel was praying about. Now Daniel 6:10 doesn’t tell us much about what Daniel was praying, other than that he “prayed and gave thanks.” Much could be said about the practice of thanksgiving in the midst of crisis, Daniel 9 shows us the sorts of things that Daniel prayed for. There, Daniel doesn’t just turn his face to Jerusalem, we see that his earnest prayers were for Jerusalem, God’s people, and the end of their exile.

While there is much to be thankful for even now, there is also much to pray about as infection rates continue to rise and more people we know are affected by this crisis.  Even if our current crisis isn’t comparable to Israel’s exile, we are all stuck in a strange land looking forward to our return to a home we have not seen, where all will finally be as it ought, and we can worship together in spirit and in truth. Now is a good time to pray that God’s kingdom comes on earth as it is in heaven.

However long this season lasts, Daniel’s life in exile can help us structure our lives in self-isolation – helping us orient our hearts towards our true home and helping us pray that our home would come quickly. 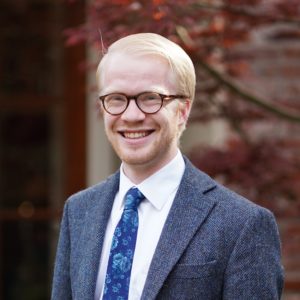 D.S. Chapman is a writer and poet. He grew up in the Pacific Northwest, studied English at Grove City College, completed the Capital Fellows Program at McLean Presbyterian Church, and currently lives and works in Northern Virginia.

Prayers During the Pandemic

A Poet’s response to a Prophet

Rhinos, Hedgehogs, and Snakes – Navigating Life Together During COVID-19 Lockdowns