Tacos and tortillas are easy. And adios is like that. But what about las golondrinas? and Sacramento? Having grown up in California, I began to learn Spanish in the second grade, making my way through elementary letters and numbers, year by year learning something of the complexity of another language. And while I never became fluent, the words and their sounds are written deep into who I am. Some of that is that I was born under the Sangre de Cristo mountains of Colorado in the San Luis Valley; and that I grew up under the Sierra Nevada mountains of California in the San Joaquin Valley; the rest is due to the reality that America borders Mexico and is neighbor to a Latino culture that we are never far removed from in our history, our demography, and our political economy.

Living in the world that I do, I hear other languages often— even this week paying attention to people as they pass by on the sidewalks of Coronado, CA. Sometimes I hear English, but more often than not it is Spanish, and even sometimes French and Mandarin. While not trying to listen in, I am aware that another tongue is telling a tale of life in the world.

Much of the work of my life is translation. While I live and move and have my being in my body in my life, I am never far from the hearts and minds of others who are not me. Can we communicate? Is it possible to really hear each other? To honestly understand each other?

For years I have been asking this question, “Can you sing songs that are shaped by the truest truths of the universe in language the whole world can understand?” The question is as true for the singers and songwriters of the world, as it is for artists of all kinds, as it is for businesspeople in the marketplaces of the world, the butchers, the bakers and the candlestick-makers wherever work is done on the face of the earth. For all of us it is in fact a question of our place in the world, of knowing who we are and why we are, of what we will do with our lives— yes, it is the question of vocation, which is at the heart of life for everyone everywhere.

My work focuses on translating the ideas of vocation and the common good for people who may not have ever thought about it. Because we are human beings together, our beliefs about life and the world shape the way we live in the world— and that has consequence for other people. We are neighbors whether we like it or not, whether we are very good ones or not. It cannot be otherwise, and to be a neighbor means that we are able to communicate about things that matter for our common life.

In reflecting on the days and weeks and years that are mine, I know that I am drawn into conversations with folks who see and hear the world differently than I do. One project is the deepening work of the Economics of Mutuality, centered in Geneva, Switzerland. An honest effort to rethink the business of business, I am a senior advisor and “professor at large” for this, given the task of translating the idea of vocation for people who perhaps have never imagined a word like it, or even an idea like it. Can we make sense of a rich idea like this, but in language the whole world can understand?

Sons of Adam and daughters of Eve that we are, we are made for meaning. We long for purpose and significance, in our very bones we do, hoping and hoping again that the days of our lives will be for and about something that matters. If that is true for us as individuals, then it is true— differently imagined and embodied —for institutions too; the business of business, for example.

There is nothing romantic about any of this, of nice people imagining a world that that does not exist, pretending to live in place that only dreamers dream of. Instead this work is brought into being by people who are every day engaged in the work of work, where dollars and cents and much more are on the line. But the question behind the project is an important one: can we keep at the work of our lives if it doesn’t really matter? if all that it is about is making more money? if my own ambition is the beginning and end of everything?

And this is why there is good work being done to argue for something more, e.g. the books, “Completing Capitalism: Heal Business to Heal the World,” and “Putting Purpose Into Practice,” for example, from the Economics of Mutuality. It is this paradigm that is the rich root of my work of translation here, of straddling the worlds of the global marketplace with philosophical and theological reflection on the nature of reality, and of what it means to be human.

The deeper I am drawn into this, the more I think about Wendell Berry’s argument, “It All Turns on Affection.” Our flourishing as a people depends on our willingness to rethink the meaning of life and of labor, of our work and the world of work. Affection always implies relationship and responsibility, which together form a morally meaningful life, whether we are wonderfully employed or tragically unemployed, whether our labor honestly contributes to human well-being, or insidiously works against it. But affection— seeing ourselves implicated, for love’s sake — is both a fundamental critique of the world we know, and a signpost of something more, a window into the possibility that things could and should be different. If maximizing shareholder profit is the only reason we work, the only reason for business, it fails to account for the deeper reasons-for-being that our hearts and history require. The truer truth is that “neighbor” and “neighborliness” are more than nice ideas, and their recovery is crucial if we are to be well and do well in the 21st-century.

But to make that case is hard, especially if all we have known is hard-hearted business-as-usual, the realeconomik of a global capitalism that is neither just nor merciful, insisting on a go-for-the-jugular economy that inevitably serves no one well. The grain of the universe asks more of us, and we need words and ideas that are rich enough and true enough to get us there. 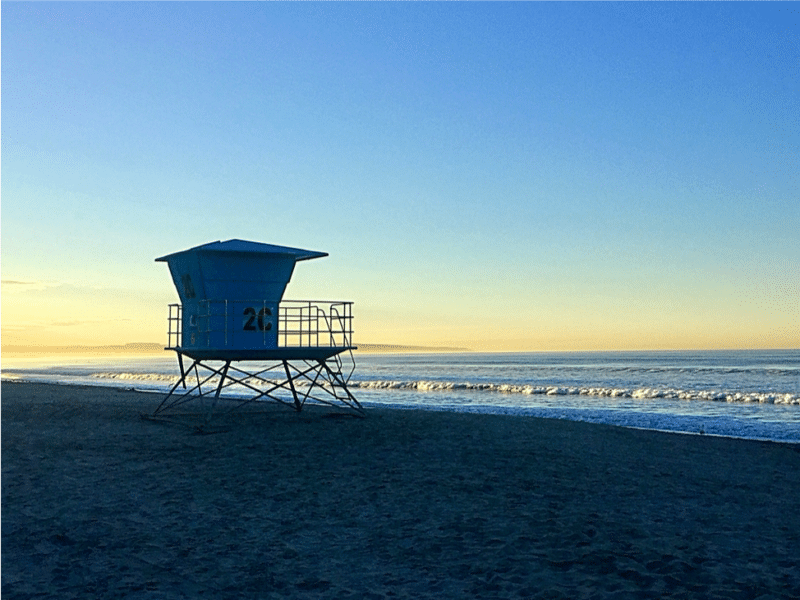 (Morning light on the beach and beyond, from Coronado, California to Tijuana, Mexico.)

The Way the World’s Supposed to Be

The Way of Praxis

Missio on Generosity: Vocational Clout for the Common Good