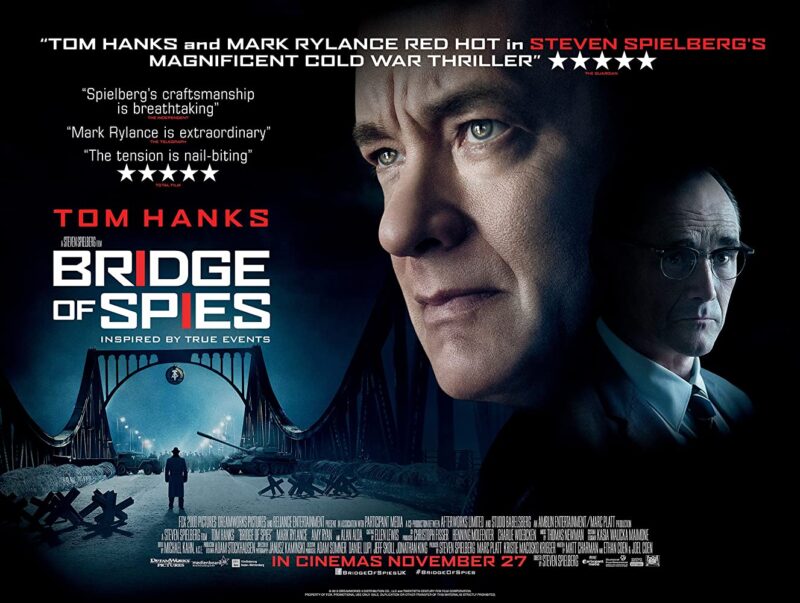 “At crucial moments of choice, most of the business of choosing is already over.”

The longer I watched “Bridge of Spies,” the new film by the master storyteller Steven Spielberg, starring one of his favorite actors, Tom Hanks, the more I thought of Murdoch’s insight into who we are and how we live. Based on the Cold War conflict between the United States and the Soviet Union, it tells the tale of the capture of the U2 spy plane with its pilot Gary Francis Powers, and the long, hard work of attorney Jim Donovan for his release, eventually trading a Russian spy for an American spy on a bridge in Berlin in 1962.

The story is Donovan’s, played by Hanks, a World War II veteran who was a central figure in the Nuremberg Trials, with brilliance bringing about the convictions of the Nazi leadership by insisting that the death camps be filmed, and that the film be shown in the courtroom, allowing the judges to see the horror of evil incarnate. Over the next 15 years he became a founding partner in a New York law firm, settling into the ordinary rhythms of a man moving from his 20s to his 40s— a family, a job, a life, unmarked by anything extraordinary.

Until the United States caught a Soviet spy, that is, and Donovan was chosen by his peers to defend the spy on behalf of America. In the height of global fears brought on by the Cold War, escalated by the “We will crush you!” rhetoric of Khrushchev— with little kids like me learning to hide under our schools desks, hoping against hope that the air raid sirens never went off, warning us of the end of life as we knew it —Donovan’s decision made him a persona non grata. Why would you defend him?! A Soviet spy?! The popular opinion was that the spy did not deserve the honor of a defense. The proverbial man-on-the-street would just as soon crucify him, than try him.

Born of a truer patriotism founded on his devout Christian faith, he simply could and would do nothing other than love the spy as he himself hoped he would be loved— in and through the vocation that was his, a trial attorney who knew the whys and wherefores of the law. The heart of his moral vision was the belief that the Soviet spy, and the watching world, deserved to see America be America, living by its creed. If the Constitution promises an honest trial with honest laws, then even our enemy should be accorded a blind justice, the scales not weighted by popular opinion. Justice cannot be “just us,” but must be an equal justice under the law, as we promise ourselves and the world.

But in this frail world, any justice done is only proximate, because not all that is right and good and fair is ever fully accomplished— and it is always messy, a sausage-making affair when all is said and done. From the story on screen, and from what we can know from history beyond the film, that was true here too. Promises made were broken, horrible things were said and done, compromises made the good possible, but in the end we know that proximate justice was achieved, something that mattered for America and the world actually happened. And when the credits roll, we have met a good man who did good work, which is a story we don’t often see at the local cinema.

I won’t tell more here, but only that Spielberg holds our hearts, following the story of Donovan’s commitment to justice and mercy woven through his work as a lawyer. And when the spies finally meet on the bridge in Berlin, walking past each other back into their own worlds, the human reason is that one good man never saw the choice as a choice— do we treat our enemy as a neighbor? —because for him, the business of choosing was already over, and for a brief shining moment, his character and the character of his country were one.

The Advent of Surprise